Toxic Leadership is when psychological discomfort becomes the norm for the team. As a result, employees do exactly as much as is required of them and not a grain more, voluntarily do not stay at work for a minute, stop showing initiative, and many other charms. There are many signs of toxic leadership, but before discussing them, let’s discuss what toxic leadership at work is.

What Is Toxic Leadership

Toxic leadership refers to leaders who create a negative and harmful work environment through their actions and behaviors. These leaders may engage in bullying, harassment, manipulation, or other abusive behaviors. Toxic leadership refers to a leadership style characterized by negative and detrimental behaviors that can harm the leader’s followers, the organization, and, ultimately, the leader themselves. These behaviors include arrogance, autocracy, irritability, maladjustment, lack of confidence, incompetence, emphasis on hierarchy, unrealistic expectations, symbols of personal authority, and discriminatory behavior.

Examples of toxic leadership behaviors include spreading rumors and gossip, undermining colleagues, and failing to provide clear direction or support. It’s important to note that toxic leadership is not only limited to the top of an organization but can also exist in middle management and front-line supervisors.

If you have ever encountered toxic leadership, you will recognize such a company from the doorstep, in the literal sense – entering the office.

Ordinary employees here are quieter than water and lower than grass. As a rule, they are polite, even helpful. At their level, they have normal interpersonal relationships. But as soon as the door of the chief’s office opens, conversations subside, faces become serious, and everyone makes an extremely busy and smart look.

Even the interior of the office speaks volumes. Imperial manners are observed: a huge hall and an office for the most important leader and modest conditions for ordinary employees.

Management in the company is built on fear. The toxic leader believes that this is the best motivator in managing people. People move when they are afraid. Techniques like situational leadership, typology of subordinates, and environmental management are just nonsense here. Some of the signs of toxic leadership in the workplace include:

The results of the devaluation of employee merit will not be good enough. Still, it could have been better, faster, and more efficient. And if the effect of the work

is difficult to underestimate, then its achievement will be attributed to the whole team, the successful situation, the weather, and the boss himself. And he won’t be shy.

No matter how brilliant ideas you submit, everyone will be perceived them with indifference. If you want, do it yourself, but don’t expect support from me. Ideas require changes in the way we work and do business. And this is unusual; it is still unknown how it will end. And what if the built-up system of relationships is shaken?

No room for error

Even minor mistakes are inflated to the size of an elephant, and then the same violent negative reaction is issued: screams, humiliation, and threats. Here who loves more? Sometimes the whole arsenal is used.

A toxic leader does not even think about hiding a bad mood, even if it was not a work situation that spoiled it but a personal situation.

When the leader shows up in a bad mood, a whisper runs through the office that the boss is out of sorts. Nobody smokes, and nobody drinks tea. Everyone is busy with work. In this mode, performance seems to increase. From which the boss concludes: when I am angry, people work better. So, it is beneficial to manipulate and show a bad mood.

“Write a statement why I need such employees, such management of the department is no good.” The head of the ways of blackmailing subordinates is more than enough. And the toxic manager enjoys using them. Not about meanings but about the outer wrapper. In my example, the business owner personally proofread articles and corrected words that were not part of his

vocabulary. It was necessary to coordinate not the content of the article and not the facts but, for example, the verb that was used in the text.

Disrespect for work time and tasks of others

“I’m at lunch,” and a customer or employee who waits an hour and a half for an invoice will wait. Employees waiting for an audience with a toxic leader spend 40, 60 minutes, and an hour and a half at the door. Despite the fact that the head himself called the employee to the designated time and you can’t leave.

There are a few options here. The employees will either obey the system, or they will immediately understand that this is not for them, or the third, intermediate one will work for a short time. It depends on the employee’s patience, motivation, and personal situation.

If the self-esteem of the employees is unstable, daily criticism, depreciation, and manipulation will soon shake their faith in their strengths and professionalism.

The result is an insecure person who does not notice his own successes, considers achievements in work to be something taken for granted and does not appropriate his own merits.

Within a short time, the whole alignment in the company and the principles of management become clear to their employees. Their career in it lasts from a few days to a month. Well, maybe a little longer. They understand that such approaches are not for them and dump them.

The team starts referring to the toxic leader as dad, mom, boss, boss, or just a third-person pronoun like “he won’t be here today”.

When people management is built on fear, when leaders do not address

human values ​​in their work, these very values ​​are washed out of the daily life of the team. And yes, there is no command. Here everyone is for himself.

The favorite method of promotion and earning stars for shoulder straps is to report on a colleague, point out mistakes, and be good in the eyes of superiors due to the mistakes of another.

It’s not easy to combat toxic leadership, but every employee should try to overcome and play his role in creating a positive workplace. 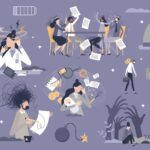 Previous post Managing Stress And Anxiety At Work: How To Overcome With 4 Coping Strategies

Toxic Workplace Culture: 5 Signs, Examples And How To Fix Them